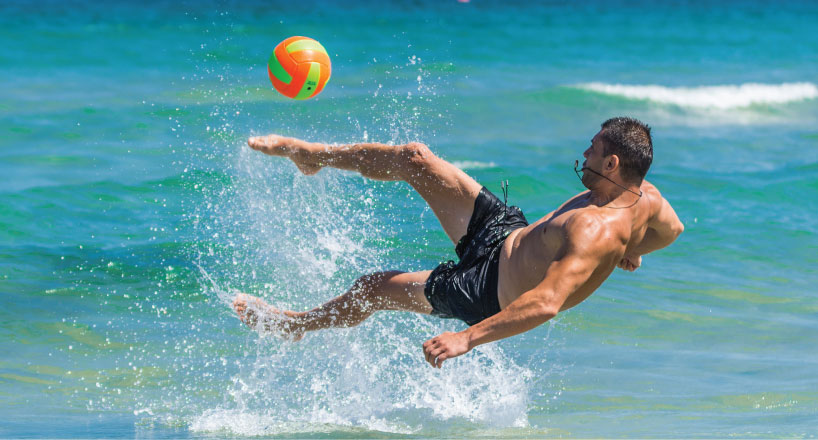 The Latvian Sports Federation Council (hereinafter – LSFP), joined forces with five national and two international sports organisations in European Union‘s Erasmus + project to develop an accessible and inclusive model of beach games for sports competition and physical activities on natural beaches near the sea or ocean and on artificially formed beaches in urban environments, cities or its surroundings and by rivers or lakes. The BeActive Beach Games will be implemented for the first time in two countries, in August this year in Riga, Latvia, and in September in Portimao, Portugal.

In the project following organisations have united – Latvian Sports Federation Council, as project coordinators, Estonian Beach Sports Federation, Lithuanian Union of Sports Federations, Portuguese Institute of Sports and Youth, Union of Sports Federations in Catalonia, Italian National Democratic Organisation of Social Action, as well as the International Sport for All Association and the International Sport and Culture Association. In cooperation between all organisations, a model for inclusive and accessible beach games will be established over a year and a half, including a manual for games organisers, as well as the development of methodological materials to be used for both individual and organisational purposes. The aim of the project is to seek new ways of attracting people, regardless of age, health opportunities, physical fitness or skills, to engage in active lifestyle, and to create a sports movement that would be inclusive, to increase overall participation in sport, and also to encourage the involvement of everyday less visible, active and socially vulnerable groups of society.

Starting from our personal experience of playing ball in the backyard as a child to the Olympics, sport has proved – it can be an excellent way to find a common language for different generations, break down barriers between different social groups or just start talking to someone who has always stood by. The diversity we encounter in sport shows that, in order to be physically active every day, it does not require additional resources and with little thought, it is possible to convert any surrounding environment into the playground. The BeActive Beach Games model will be based directly on these principles for the inclusion of the various groups of society – games available to everyone, rules that can be changed or re-invented according to players, their available options and capabilities, and from which the most important objective is to encourage us to be active, including being on the beach,” points out the Latvian Sports Federation Council (LSFP) President Einars Fogelis.

He also highlights, one of the goals of developing the Beach Games – expanding the #BeActive movement by actively offering ideas for an accessible, inclusive and exciting type of physical activity in a new environment – various beaches in Europe.

Over the last decade, the involvement of national, local, non-governmental and private organisations in promoting active forms of life has increased, but this has not significantly changed public habits in Europe. The Eurobarometer survey 2017 shows that at least 40% of European citizens are engaged in sport or physical activity at least once a week, and even this is less than recommended by the World Health Organisation. 60% of respondents indicate that they play sports or are physically active occasionally or never and this trend is dipping even more compared to the previous survey. The European Commission has therefore renewed its focus in recent years on measures to promote physically active lifestyle.

“The inactive and sedentary trend in Europe remains worrying: the percentage of people who are not physically active is gradually increasing. A large part of society does not associate themselves with images of professional athletes in glossy magazines in major sports organisations, so it is important to constantly encourage and embrace people to do simple and accessible physical activities or movements every day – more walking, cycling, playing with children, using stairs instead of elevators or just doing what is more suitable for each one of us. If we want to fight the inactive and sedentary way of life, forces must be joined with many and different groups of society in order to not only create an environment but also a culture that promotes the most active way of life. BeActive Beach Games is one of the promotional steps – to show how to create the environment, preconditions and suggest how to be as active as much as possible on the beach – whether it would be a natural beach in Latvia and Portugal or an artificially created beach in the centre of one of the European capitals,” stresses Laura-Maria Tiidla, project manager of the International Sports and Culture Association (ISCA). By bringing together 240 members from 88 countries around the world in the public, non-governmental and private sectors, ISCA is one of the most visible international organisations that promotes and informs about physical activities trend on day-to-day basis and its role in creating an active society. The project will develop methodological and educational materials that will serve as a support for sports events organisers and other stakeholders of BeActive Beach Games or similar beach sports events at both national and international levels. Unlike others, this set of beach sports events will be designed to focus on inclusive aspects of different groups of society.

By organising BeActive Beach Games in Latvia and Portugal, and by assembling experience in other countries in Europe and internationally, special attention will be paid on how to involve families and its members in all generations and how to reach and engage the various socially vulnerable groups of society.

A total of 3 materials will be developed:

Project partners
To develop accessible and inclusive beach sports event BeActive Beach Games models with the possibility of organising them on natural or artificially formed beaches, the Erasmus + project has joined six countries – Latvia, Estonia, Lithuania, Italy, Spain and Portugal – as well as two international sports organisations. By mid-2020, the project will develop administrative, methodical and educational materials as support for sports events organisers and other stakeholders, which also summarises the experience of the first BeActive Beach Games in August 2019 in Latvia and September in Portugal.