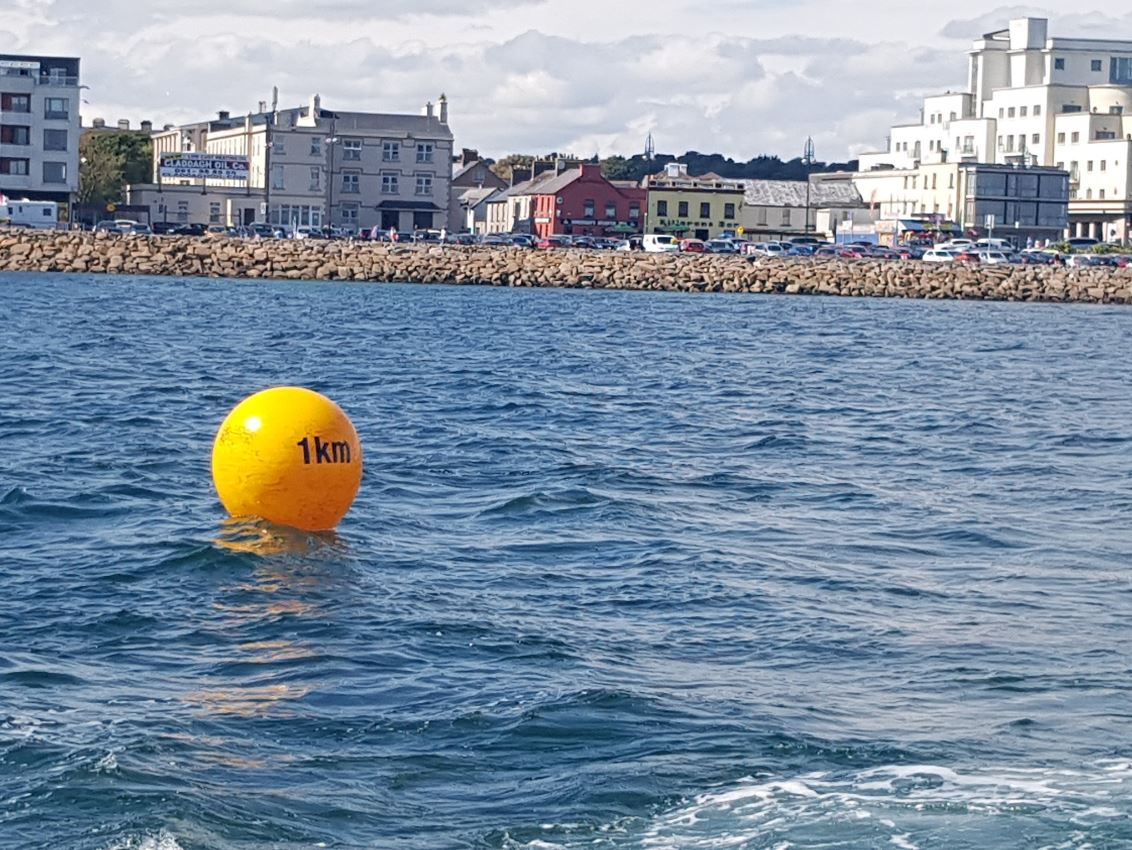 To promote swimming in the sea, to encourage people to be active and last but not least to promote the social benefits of meeting and swimming together, five swim buoys have been reinstalled in the sea in Galway city, Salthill beach. The swim distance markers, that are located at 100m, 250m, 500m, 750m, and 1km distances from Blackrock Tower in Salthill parallel to the Prom, have acted as a catalyst over the past eight years for increasing the number of people who swim in the sea in Salthill.

The range of swim distance buoys also promotes progression with the aim to increase the distance. This is the first initiative of its kind in Ireland and it got very positive feedback from the population. The initiative was realised by Healthy Galway City as a part of a Healthy Ireland – Healthy Cities and Counties network (the national framework for action to improve the health and wellbeing) in collaboration with the Ryan Institute, National University of Ireland Galway, Health Service Executive, Galway City Council, Galway Sports Partnership and local sports clubs.

The swim distance markers initiative has won an international award that recognises partnerships that have transformed urban spaces into active spaces.

Fiona Donovan, project lead for the Healthy Ireland: Healthy Cities and Counties project and who developed the idea for the swim distance markers, says that it is so important to support people to be active and healthy. “The swim distance markers in Salthill have been hugely popular as they have opened up people’s mind to swimming in the sea, provide easy sighting for swimmers, and they also provide incentives to progress.”

To transform the idea into a reality, the technical expertise of Sheena Fennell, senior technician with NUIG Earth and Ocean Sciences has been crucial. Ms Fennell said the moorings have been designed to withstand the summer swell within Galway Bay and also to be deployed easily from local boats.

“In terms of urban infrastructure, once an initial investment is made, it is low cost piece of infrastructure to promote physical activity and therefore a good example for implementation in other cities and counties in Ireland, and also across the world.”

The main strategic goals of the project are: to promote and encourage sea swimming in Galway Bay, to increase the number of people swimming in Galway Bay, to provide incentive to progress and improve sea swimming, to increase cooperation and maximise resources between relevant sports clubs. The fact that the initiative is connected to National Policy Framework (Healthy Ireland) and local structure (Healthy Galway City) ensures sustainability and access to repeat funding for the project. Furthermore, successful implementation of this project is a good example for the other cities and countries, which are part of the Healthy Cities and Counties network.