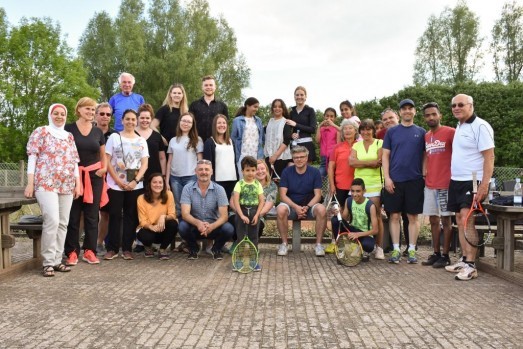 “We felt it was our duty to do something for local refugees”: Danish tennis club boosts membership by opening it’s doors

In 2018 the ISCA team and partners in the Integration of Refugees through Sport (IRTS) project visited Birkerød Tennis Club north of Copenhagen in Denmark. Birkerød has seen an influx of refugees over the last few years, and when the first waves of people came Club chairman Jesper Tvermoes said he felt it was part of his and his club’s duty to do something to help take care of the people moving into the area, ensure that they could integrate and learn Danish.

That’s why Jesper took an idea to the board that the club itself could get refugees involved to help them settle into the area. The board was unsure at first, and deliberated for some time, but with Jesper taking responsibility for this “project” they eventually backed it fully.

After initial failed attempts to advertise the initiative online and through traditional media, the club reached out to the refugee community in person, and engaged a small number of people to come along to the club – even though they had never played tennis before – after seeing their skills in table tennis. Due to the circumstances of the refugees it was decided that to help them participate they would receive one year’s free membership, be given a racket and balls, and be afforded one free lesson a week.

From this point onwards the refugee community in Birkerød started to get heavily involved in the tennis club! Now there are around 40 refugees who are members of the club, and during any one session there are 10-20 at the club, including a host of younger players, from children to teenagers.

At the club all communication is in Danish, and this has helped to integrate new arrivals and with all the children having excellent Danish skills they and many of the adults were grasping the language very quickly.

It has not only been sport and language that have helped many of the refugees integrate. The family environment and links formed with other club members have led to employment opportunities for some of the refugees, and permanent housing has even been sourced through these channels at times.

After the interesting, thorough insight into just how the tennis club had managed to have the success it has had in terms of integrating and involving refugees in the local community it was time to get into the action as the club had provided everyone with two courts to play tennis on for close to two hours! The power of sport and physical activity was on full display!